Persian born Australian conductor, Linda Safajou, has travelled extensively during her career, conducting choirs in Australia, the Commonwealth of Independent States, Malaysia, Singapore, Russia, Oman and Ethiopia. Linda is the resident conductor of the Baha’i Temple in Sydney and she also work as a Music Therapist. 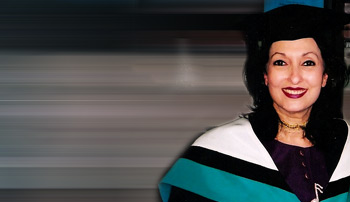 As a Music Therapist and Diversional Therapist, I have worked with a variety of clients in different settings.

“My approach as a Music Therapist requires me to write an assessment, develop care plan and write music therapy programs according to the needs of each individual client. I conduct individual music therapy sessions as well as group music therapy sessions to promote social interaction, mental stimulation, increase length of concentration and attention span, raise self confidence and self esteem, reduce anxiety, foster a sense of enjoyment and accomplishment and provide spiritual validation and exploration.Due to my interest and background in Multiculturalism I have the skills and ability to use music from different nationalities as a tool to build rapport and communication with clients from different ethnic backgrounds.”

“My proficiency as a musician enables me to draw on my experience as a professional music teacher, utilising my skills to benefit the client through improvisation, vocalisation, and employing different instruments and styles of music.”

RECENT ACTIVITIES:
Devised and implemented a scaled and coded set of evaluation responses for more efficient documentation of individual resident/client activity.Implemented a more systematic set of care plan documents in line with the five major components of the accreditation guidelines (Standard 3 of question 15) for Diversional Therapy.

OCTOBER 2006:
Presentation on the Systematic Evaluation of the Music Therapy, Westmead Cumberland Hospital.

FEBRUARY 2006:
Devised and Implemented the Bridgeway House Volunteer Program to address the cultural, social and physiological needs of residents at both Aged care and Mental Health facilities, as well as their cognitive, educational and therapeutic requirements.

SEPTEMBER 2005:
Performed at the 50th Anniversary of the Baha’i Temple in Samoa.

OCTOBER 2004:
By request of the Norfolk Island government, performed and conducted workshops at the Multicultural Festival in Norfolk Island.

SEPTEMBER 2003:
Performed at the Tawila Festival in Samoa.

2000 – PRESENT:
Conductor and Founder of the Nations in Harmony Choir. Performances have included International Year of Volunteers Day Presentation attended by Mr Phillip Ruddock (Minister for Immigration), Closing concert for International Year of Volunteers at Darling Harbour, citizenship ceremonies, stralia Day ceremony at Sydney Opera House by invitation of Department of Immigration. The choir also participated in the Tuela Festival in Samoa in 2001.

1992 – PRESENT:
Conductor, Baha’i Temple Choir, Sydney. Conducts a four-part a cappella choir at each Sunday service in Sydney Baha’i Temple, and at external proclamation events in the Sydney area.

NOVEMBER 1998:
Celebration of the Centenary of the Baha’i Faith in Paris, France. trained participants in four-part choral singing; adapted and arranged Baha’i sacred songs in French, English, Arabic and Persian for performance during the Centenary Concert at Paris Opera House.

NOVEMBER 1997:
Celebration of the birth of Baha ú’ llah, Singapore. Trained a Choir in four-part harmony and assisted in development of a dramatic presentation featuring vignettes from the life of Baha ú’ llah performing for an audience including an ambassador and religious leaders representing the Hindu, Zoroastrian, Buddhist, Taoist, Christian, Muslim and Sikh Faiths.

FEBRUARY 1997:
First Novaya Era Academy Classes, Almaty, Kazakstan.
Trained adults and youth from various countries of the Commonwealth of Independent States in four-part harmony to enhance use of Arts in teaching and construction work. Performed formed the core of the Lights of unity Choir, which toured Russia and other countries of the Commonwealth on Independent States, having already developed a solid foundation in choral singing.

OTHER INTERESTS AND ACHIEVEMENTS:

Performed from age 13 at the court of Shah if Iran and around the world as member of the National Orchestra of Iran. Performed in the 2500 Celebration in Persepolis for many of the Kings and Rulers of the world and presented a medal from Shah of Iran during the celebrations.